WILL AFRICA OVERCOME OVERRELIANCE ON RELIGION, WITCHCRAFT AND MAGIC? 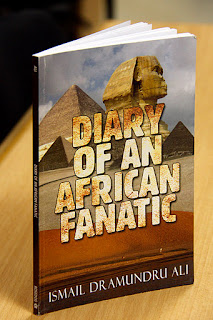 A NEW book by a Ugandan author that attempts to analyse the challenges of Africa concludes that the Africans have been slow towards solving their problems in all spheres of life because of the overreliance on religion, witchcraft and magic to overcome their predicament.

“The African regime had correctly studied the African mind and seen that despite the suffering the modern African endured, he still found enough capacity to endure more. Africans loved the comforts and joys life had to offer…,” Ismail Ali Dramundru argues in his book, ‘Diary of an African Fanatic.’

“The African regime knew religion was the opium of the masses so they encouraged it unlike the ban that was put in place in Soviet Russia. Africa’s rogue rulers let a lopsided version of religion prevail to make the people more subservient…,” Dramundru adds in his book published by RoseDog Books.

“…African regimes have to be thankful of the opium said to be in religion because Africans are a mightily religious lot and their slow response may directly have something to do with the beliefs passed on to them by religion,” he concludes.

What is the solution?

According to Dramundru, “The African God is the only God capable of saving Africa from its wretched place on earth – seeing everybody had a God in their image, it was not too much to ask of Africa to produce its own God. If Africa can go into its illustrious past and draw on the culture of its ancestors, they will know and learn about the God they feel has abandoned them…”

The narration in his first book is partly a personal experience and fiction. “The events in the story either happened to me or to somebody I know,” he told The EastAfrican.

The book tackles issues of colonialism, civilization, the leadership and accountability crisis in Africa, poor polices, the dangers of tribalism, environmental degradation, and the challenges of rural – urban, terrorism and guy rights issues, among others.

Dramundru believes that Africa’s biggest problem is fear in confronting the bad leaders who have let the continent down. “We are so fearful to fight for a larger cause than our next meal. The world over people have fought for their freedom and continue to exhibit very strong tendencies of keeping it that way…”

He suggests that: “…To prosper, Africans will have to discard the fear it has generated over many years. The fear to lose one’s own life for a just cause must inspire Africans to fight injustice wherever they find it on the African continent. If as is the case, millions of Africans wallow in poverty, sickness, and disease. What else do we have to fear? How bad can it get now?”

After university he co-founded a non-profit venture called the African Self Help Initiative (ASHI) with an emphasis on community upliftment. ASHI soon became successful attracting the attention and greed of the ruling party and eventually paid a heavy price for refusing to unite its social work and the political message of the ruling party. “…They arrested our members on dubious charges of treason and terrorism. Our offices were shut down and soldiers placed to guard them. We were accused of corruption and defrauding the public…,” he narrates.

Dramundru fled to the US where he got admitted into a master’s programme at a business school in New York City. He had to work to raise his tuition fees – which turned out to be a hassle. He discovered that bad employers take advantage of students without work permits to offer them low pay, or not to pay their wages, physically abuse, insult, verbal taunting and harass the poor students.

Dramundru laments that tribalism has followed the Africans to America. “…There was nothing improper with prizing your culture and origin. But there is something definitely wrong when the tribe feels its approach to issues is the ultimate reality. The tribe’s enemies attain no salvation – they are permanent foes. These thoughts and ways of survival learnt in a different past cannot be now expected to dictate behaviour in a current age.”

“The tribal conduct and its call for total solidarity among its members reek of the remnants of a bygone era – an era where reason was hijacked and buried in the pit of tribal history and lore. So, like cancer, tribalism is thriving in Africa untreated. It is not objective nor is it critical or progressive in any way shape or form. My tribal biases dictate how I treat other people and societies. …Africa has chosen to lay more emphasis on the need for tribal solidarity – the outcome is there for all to see: war and endless wars,” he argues.

Dramundru resides in Washington, D.C., USA and holds a bachelor’s degree in communications studies with a minor in Islamic Studies and a master’s degree in human resource development and counselling from the University of Bridgeport Connecticut. He is other book dealing with upliftment on the continent is underway.

Ends.
Posted by Bamuturaki MUSINGUZI at 3:07 AM