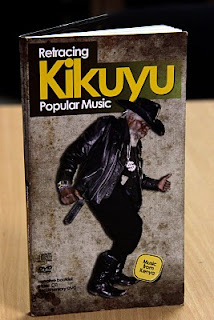 A NEW CD complied and produced by Ketebul Music, an NGO based in Nairobi, Kenya, contains a sampling of Kikuyu popular music through several decades and genres. From the blending of the Karing’aring’a or traditional rattles with the accordion in the 1940s, to the imitation of yodeling and country and western guitar in the 1950s.

The nineteen tracks are songs about love lost and love found; personal sacrifice in the struggle for independence; traditions altered and abandoned with the adoption of urban living; the challenges of survival in a money economy; songs in praise of honesty and hard work. Songs about life.

The narrative booklet, music CD and documentary DVD titled, “Retracing Kikuyu Popular Music,” will be launched later this month in Nairobi. This is a non-commercial venture and all the proceeds from this multimedia package will go into further research, development and documentation of East African music.

Mwangi wa Maguru’s 1957 song ‘Ndinakuruma’ is about a jilted lover’s advice to his girl friend. He bemoans the fact that she has left him and succumbed to immorality in the big city. He urges her to shun her evil ways and get back to decent living. All in good faith. Ndinakuruma: ‘I have not insulted you.’

Roman Warigi’s 1962 song ‘Kunda Ruru’ is about a carefree drunkard singing of his drinking prowess, proclaiming that he has enough money to buy himself several rounds. If he gets drunk he will just lie down where he is, fall asleep, and start drinking again as soon as he gets up in the morning!

In his 1966 song, ‘Ndari Ikumi na Inya,’ Joseph Kamaru advises young men to be wary of promiscuous young as an example. He discovered to his horror, that when she called him ‘ndari’ or ‘darling’ he was in fact one of fourteen, hence the song’s title.

In his 1979 song ‘Rugano Rwa Naivasha,’ SK Kimani narrates to his friend Jimmy how he was raised on the shores of Lake Naivasha by his parents, who were fishermen. He tells Jimmy how he met a girl called Jane and the woes he faced when he was knifed in the ribs by a jealous lover. By the grace of God he survived the attack and decided to go back home to Naivasha to be comforted by his father and mother.

Roman Warigi’s 1962 song ‘Muhiki’ is a tragicomic tale of a prospective groom who writes a letter inviting his ex-girl friend to his wedding only to panic at the last moment when he finds the ex more alluring that his chosen bride. Angry and betrayed the ex declares she will never speak to him again. His belated request to the preacher to wed him to both women is flatly denied!

This multimedia production is a must collection for those interested in how African rhythms and styles have been merged with western instruments.


Posted by Bamuturaki MUSINGUZI at 5:11 AM No comments: