THE NOVEL 'TSOTSI' RESONATES WITH CRIME IN SOUTH AFRICA TODAY 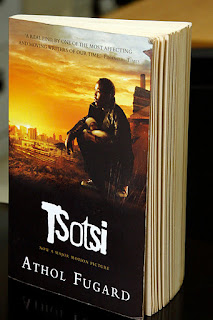 ATHOL Fugard could have written his much acclaimed novel “Tsotsi,” 49 years ago and published it in 1980; it resonates with the current crime like robbery, murder and rape, the biting poverty, shuttered dreams and hopes in South Africa – party as a result of the defunct apartheid system.

However, the good news is that the number of murders in South Africa declined by 6.5 per cent in 2010/2011, with 15, 940 cases being recorded, according to annual police crime statistics released in September 2011. The murder rate has come down consistently by nearly 20 percent since 2003/2004.

In the period from April 2010 to March 2011, attempted murders had fallen by 12.2 per cent, whereas assault with intent to inflict grievous bodily harm had dropped by 4.5 per cent. Robbery with aggravating circumstances was also down by 12 per cent.

The “Tsotsi,” story begins in an illegal drinking dive known as a shebeen on a Friday night with four gangsters plotting to attack mine workers in the rail station returning home with their earnings. Their criminal repertoire included attacking lonely taxi drivers, or a darkened, deserted house in one of the white suburbs.

“The trains,” Tsotsi said. “Let’s take one on the trains.”

The gang’s target was Gumboot Dhlamini, a mine worker who was returning home after a year’s work in the city with all his savings.

The four including Tsotsi and Die Aap surrounded Gumboot in the coach. Butcher worked the bicycle spoke up and into Gumboot’s heart. It was Buston who slipped his hand into the pocket and took out the pay packet. They left him dead in the train.

Tsotsi is an angry young gang leader in the South African township of Sopiatown. He was the youngest of the four. He owned a sheath-knife, the blade four inches long. He carried it in the back pocket of his trousers, and slept with it under his jacket which he rolled up and used as a pillow. The knife was not only his weapon, but also a fetish, a talisman that conjured away bad spirits and established him securely in his life.

Tsotsi hated questions about himself and how no one knew anything about him except that he was the hardest, the quickest, the cleverest that had ever been and once somebody had tried to find out something and he was dead.

Tsotsi hated questions for a profound but simple reason. He didn’t know the answers…neither his name, nor his age, nor any of the other answers that men assemble and shape into the semblance of a life. His memory went back vaguely to a group of young boys scavenging the township for scraps needed to keep alive. Before that a few vague, moody memories, a police chase and finding himself alone.

Tsotsi didn’t know because he had never been told, and if he had known he no longer remembered, and his not knowing himself had a deeper meaning than his name and his age. He allowed himself no thought of himself, he remembered no yesterdays, and tomorrow existed only when it was the present, living moment. He was as old as that moment, and his name was the name, in a way, of all men.

One day when he was scavenging on the streets an Indian chased him away from his shop door, shouting and calling him a tsotsi. So he decided to take on the name of Tsotsi. Tsotsi is an Afrikaans term for a hoodlum or a thug.

In a drunken state one day, Boston, asks Tsotsi for his age and expressed his displeasure of how they had ended Gumboot’s life.

In a sudden and irrational impulse Tsotsi brutally attacked Boston and nearly beat him to death.

One night, in a moonlit grove of the bluegum trees, a woman Tsotsi attempts to rape forces a shoebox into his arms. The box contains a baby, and his life is inexorably changed. He begins to remember his troubled childhood, to rediscover himself and his capacity to love, find mercy and sympathy.

Changing the baby’s cloths and feeding him proved a challenge. He tried to give it water and bread soaked in water, but it had all come driveling out. He was chancing his hand at a game he had never dared play and the baby was the dice, so to speak. He hid the baby away from the other gangsters in the ruins of buildings.

Tsotsi forced Miriam Ngidi, an eighteen year old mother of one to feed and clean his baby. The thought of that greedy, decrepit, foul-smelling bundle in the rags on the bed at her breast filled her with horror. It was a violation of her body that brought to a sharp pitch the possessive, miserly twist in her nature. “He’s too dirty!” Miriam cried.

“Then clean him,” Tsotsi replied savagely. “Clean him and feed him.”

When she still hesitated, he took out his knife and gave her one last chance. She fought down her disgust and went to work.

Tsotsi heard the bulldozers and saw the dust a long way away as they razed the ruins of buildings completely to the ground. He run and got there with seconds to spare. He had enough time to dive for the corner where the baby was hidden, before the first crack snaked along the wall and the topmost bricks came falling down, time enough even then to look, and then finally to remember. Then it was too late for anything; and the wall came down on top of him, flattening him into the dust.

The only novel by prize-winning playwright Fugard, Tsotsi’s raw power and rare humanity show how decency and compassion can survive against all the odds.

Fugard was born in Middelburg in South Africa in 1932, to an Afrikaner mother and English father. The racial discrimination that he observed while growing up under apartheid has greatly influence his writing.

The South African director, Gavin Hood shot the film “Tsotsi” in South Africa in 2004 and 2005. Among the numerous awards it has won include the Best Foreign Film at the 2006 Academy Awards, and the Jury Prize for Best Feature at the 2006 Pan African Film and Arts Festival.

Ends.
Posted by Bamuturaki MUSINGUZI at 1:01 AM