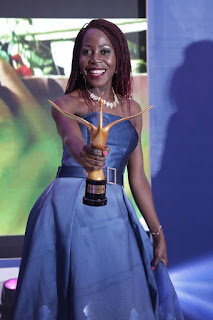 Rehema Nanfuka holds the film of the year award. Photo by ROLLAND MANZI. 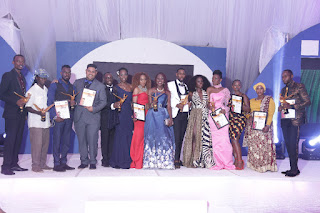 The cast and crew members of the ‘Veronica’s Wish’ with their accolades. Photo by ROLLAND MANZI.

THE film Veronica’s Wish dominated the 2018 Uganda Film Festival (UFF) awards gala night by winning nine accolades out of the 12 categories it had been nominated in.

The drama is acted in English and written by Nisha Kalema is directed by Rehema Nanfuka. Veronica’s Wish portrays a clash of love and terminal illness between two lovers Veronica (Nisha Kalema) and Michael (Housen Mushema).

Michael and Veronica are living their soulmate life and engaged to marry but their journey takes a drastic turn when Veronica gets hit by mysterious illness days away from her wedding. Veronica must choose between love and saving her life and that of others.

As to how does it feel like winning the Film of the Year award, Nanfuka told me: “It feels so good. I feel like I have won it for all the women in the film industry. I truly hope it inspires many to start directing and producing their own projects.”

Explaining the process of directing Veronica’s Wish, Nanfuka, said, “It was a complicated process. So many limitations we had to overcome. I’m glad we triumphed.”

As to why Veronica’s Wish is so appealing that it won nine awards, Nanfuka, observed: “It’s a beautiful love story that many people relate it to. It was well shot. The acting is brilliant. The music score is perfect and the audience relates to it emotionally. It tags on the heartstrings. It makes you love and cry and hope to be alive. It inspires and empowers. Finally it is directed by a woman, produced by a woman and the lead is a woman. Many women relate to it. It is a story that was best told by women.”

The film Bella by film producer and director Matt Bish could only manage to scoop one award after getting nine nominations. Stella Nantubwe took home the Best Supporting Actress award for her role as a prostitute in Bella.

The annual festival organised by Uganda Communications Commission (UCC) was held from November 26 - 29 in various cinemas in Kampala and Entebbe. The Awards Gala Night was held on November 30 at the Kampala Serena Hotel.

“We must now see all that of television stations air 70 per cent local content away from the Telenovelas and Indian movies that have been dominating the television content. I will make sure they comply or they face the consequences,” the UCC executive director, Godfrey Mutabazi said at the awards ceremony.

Best Documentary:
Your Music Your Voice

Best Actor in a TV Drama:
Paul Ejule – as Frank (Pastor) in Taste of Time

Best Actress in a TV Drama:
Juliet Nantambi – as Lisa in Mistakes Galz Do

Best Supporting Actress:
Stella Nantubwe – as a prostitute in Bella

Film of the Year (awarded to the Director):
Veronica’s Wish by Rehema Nanfuka


CINDERELLA, the classic quintessential story of love and magic leading from rags to riches has been staged by the Kampala Amateur Dramatics Society (KADS) capturing the virtues of hard work, love, friendship, kindness and forgiveness as compared to social ills like corruption, betrayal, hatred and jealousy.

Written by Alastair Taylor and directed by Arfaan Bholim, Cinderella – If the Shoe Fits, was KAD’s 2017 annual pantomime extravaganza held from November 30 – December 3, 2017, at the National Theatre in Kampala.

The fairy tale is about a widower, who remarries a proud woman. The new wife comes with her two daughters; Petunia (Ben Kramer) and Gladiola (Vinnie Payne).

Petunia and Gladiola ill-treat and despise the man’s daughter from his previous marriage called Cinderella (Rebecca Richards), who she is gentle and beautiful. Cinderella is enslaved and kept in rags, does all the house chores and sleeps in the attic.

The King (Rahul Varun) and Queen (Angela Godshall) of the fictitious Kampala Kingdom where Cinderella lives encourage their son, Prince Charming (Lorraine Anderson), to search for a bride by hosting a royal ball for all the single quality ladies of Kampala. Of course, Petunia and Gladiola are excited about attending, which Cinderella will not be allowed to do.

With the help of the Fairy Godmother’s magic, Cinderella disguised as the countess of Muyenga travels to the royal ball in a princely pumpkin coach. The Fairy Godmother (Taylor Hughey) also changes the poor girl’s rags into a glittering ball gown and delicate glass slippers.

The Fairy Godmother orders Cinderella to return home by midnight for the charm ends at that time. As Cinderella runs out of the ballroom and in her haste loses one of the glass slippers but keeps the other.

The handsome prince, who has fallen in love with Cinderella, finds her lost slipper. He vows to search until he finds the girl who lost the glass slipper and marry her. The prince scans through the national identify card and mobile phone registers to no avail.

Prince Charming then tries the slipper on every girl in the kingdom, and it doesn't fit any of them. Finally, Cinderella tries it on and it fits, and she produces the mate to the magical shoe just to make sure.

The fairy tale has a happy ending. Cinderella marries Prince Charming. She finds true love and happiness with the prince. She forgives her stepsisters for their past meanness and finds suitable husbands for them at the court.

In the pantomime the notorious and corrupt Kampala City Council Authority (KCCA) Chief Inspector (Keith Kisembo Kaira II) keeps demanding for all manner of licenses from the public for all types of activities they participate in.

Ironically, the inspector, who requires his juniors to maintain their integrity, accepts bribes in his office in order to waive license requirements.  The inspector, who was booed throughout the play, turns out as a reformed man at the end.

The audience had a good dose of laughter as they experienced sword fights, comedic scenes, singing, dancing, magic, and plot twists, interspersed with all the traditional pantomime antics and characters. The costumes, sound and lighting were well executed.

The cast sang and danced to a number of modern hit songs such as: Barry Gibb, Maurice Gibb and Robin Gibb’s song ‘Islands in the Stream’ first released by Kenny Rogers with Dolly Parton in 1983; Alan Menken’s composition ‘A Whole New World’ released by Peabo Bryson and Regina Belle in 1992; the official 2010 FIFA World Cup anthem ‘Waka Waka (This Time For Africa)’ by Shakira - a copy of the original hit song ‘Zamina mina’ released by the Cameroonian makossa group called Zangalewa.

As to why he wrote this production, Taylor told me: “I just liked the story of Cinderella. The two ugly sisters are very dominating and cruel to Cinderella. And yet Cinderella is kind, hardworking and she is trying to do her best.”

“I believe there are many people in Uganda doing their best in their simple essential tasks and aren’t recognised for their hard work. So, Cinderella ends up a happy woman after marrying the prince thus jumping out of misery,” Taylor added.

“I have been in Uganda for a long time so I know the local humour, mentality and what Ugandans are drawn to - or what makes Ugandans laugh,” Bholim told me.

“Ugandans are very simple people and they like humour. So when we were putting this production together we took into consideration the types of humour for both Ugandans and expatriates,” Bholim added.

According to Bholim, “There were no lessons or morals to learn from this pantomime. It was pure fun and entertainment for the people to go back home with smiles on their faces.”

Cinderella, or The Little Glass Slipper was written by the French author Charles Perrault and published in Paris in 1697. Perrault, who was born in Paris in 1628 and died in 1703, also authored Little Red Riding Hood and Sleeping Beauty.


Posted by Bamuturaki MUSINGUZI at 1:42 AM No comments: